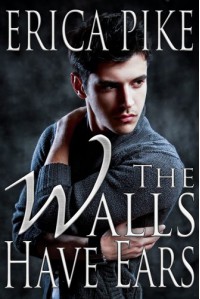 This series continues to get better and better!

Harley had been listening in on the moaning and groaning that was happening on the other side of his wall. One night, he decided to join in and then his neighbor heard him. They began a nightly routine of getting off together with the wall between them. Harley guessed that his nightly partner was Devon, one of his neighbors. He was devastated when Devon starts to date Harley's roommate, Ryan.

Harley had all my favorite qualities in a leading man. He's insecure, pessimistic, grumpy and a seriously huge drama queen. He's never had a boyfriend, so he was completely heartbroken when he was rejected by Devon. When Tasha, the other neighbor, saw this, he tried to befriend Harley. Harley was very standoffish and, really, wanted nothing to do with him. Luckily, Tasha was persistent and saw through Harley's prickly exterior.

Tasha was just a great guy all around and was a pleasure to read about. He didn't let Harley get away with his snide comments and would even rephrase sentences for Harley to repeat in a nicer way. It was great! I love when a grumpy guy is forced to have fun and be happy. They so don't want to but just can't help themselves when the right guy comes along. This is what Tasha did for Harley. He didn't let Harley get all mopey, even though he was obviously hurt at seeing Harley upset over someone else.

What a mess this situation was, but so much fun. This book is the perfect choice for something short, light and super hot. You can jump right in and don't need to read the others in the series to enjoy this little gem of a sexy book.