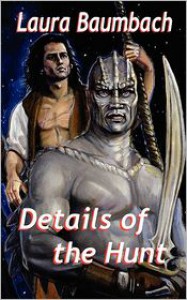 This book has a little something for everyone:

Find something to tickle your fancy? Not yet? Okay, I’ll keep going...

Too much? Over the top? YES! Was it so fun anyway? YES!

We have an alien bounty hunter, Talos, who was sent back in time to grab Captain Aiden Maymon to help search for treasure he had buried. Now, the cover is seriously bad but it does a good job of depicting how Talos was described. Yeah, yeah, Aiden could be compared to a certain pirate we all know and love. But what other pirate am I supposed to imagine? I don’t have much background in this so when someone says pirate, I think Jack. Even so, Aiden was a really fun character who immediately causes tons of mischief for Talos to deal with. And Talos was not expecting to find a mate, especially not someone like his pirate.

I went into this book knowing that everything was going to be thrown in. I think that helped me enjoy it more than I would have if I had just assumed it was only a sci-fi romance. This was my first foray into some tentaclesex and there’s not much I won’t read so HECK YES I was excited about it! I really had no clue what to expect with the how, and the what, and the where with all the tentacles. But, lemme tell you, I liked how they did it, what they did and where they did it. Me likey some tentaclesex.

My only gripe was the whole fated mates bit. Just because they’re fated isn’t an excuse for a lack of chemistry between the couple. I just don’t buy the whole “you make my cock hard, therefore you are MINE” spiel. Aiden was just really easygoing about the whole thing. Too easygoing. There wasn’t any angst over him being 700 years in the future surrounded by aliens in a space station. I don’t know about you, but I’d be freaking the fuck out. Instead, Aiden’s good with it...as long as he’s gettin’ buggered by that tentacle. So, basically, I didn’t buy into the relationship and the I Love You’s that were being thrown around.

Go in ready for some cheesy pirate lingo, a big gray alien with weird bumpy things on his chest and a giant tentacle.