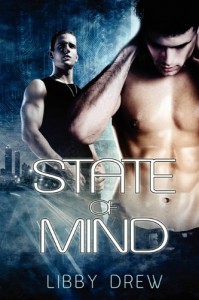 Alec and Grier are on the run from the Organization, a secret government agency that uses people called the Gifted. The Gifted have certain psychic abilities and are supposedly using them for the greater good. When Grier realizes there is corruption in the Organization the quickly deflects and is on the run. Alec is sent to find Grier, and bring him back to their leader, Ethan. The tables quickly turn on Alec and he is taken by Grier who then enlightens Alec about the shady shenanigans of the Organization.

The world building and plot was amazing. It had me guessing until the end. There were several secondary characters introduced that all had their own agendas. I love when stories have so many gray areas it’s hard to tell who to trust, even in the end.

These boys were snarky and fun. They were enemies in the beginning, so seeing them having to deal with each other in close quarters was all kinds of fantastic fun. I guess getting sent to capture the other and then being held hostage will do that to you. I enjoyed the slow progression of their relationship, from enemies to someone-I-maybe-trust, to damn-boy-your-hot, to friends, to someone-I-trust-always, then to lovers. It felt very unforced and real. The ending was more of a HFN, I would have liked an HEA. Always want an HEA with my guys.