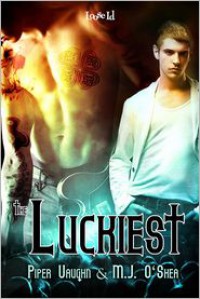 Oh the angst. The delicious ANGST.

Nick is a mess, to say the least. After his DUI and driving his car into a Saks Nick is ordered to rehab. While there he meets Luka, his nutritionist. When Nick first entered rehab he was a royal pain in the ass spoiled brat. I loved how Luka dealt with him. He killed him with kindness, never let Nick’s smart ass comments ruffle him. Eventually, this broke down Nick’s walls and they grew closer and closer. Luka is the only person in the facility that Nick seems to make a connection with and after his release they begin a slow relationship.

The complete and utter LACK of insta-love is my favorite part about this book. Nick, being a bass player in the band Luck, feels as though he has a certain image to uphold. A part of this image is that he’s never dated anyone in his life and saying he’s slightly freaked out would be an understatement. Because of this they took things slooooowwwwww. So slow, I thought I would die from UST. But, like I said, best part. The progression of their relationship was unhurried and real.

Nick, how my heart aches for him. He was such an arrogant prick for a good chunk of the book, but was able to redeem himself 100%. He’s so clueless with relationships and made mistake after mistake. Even though HE was the one breaking Luka’s heart I was on Nick’s side the whole time. Mostly because he’s had such a loveless life I wanted so badly to see him just embrace his love for Luka. Stop with the crap and ADMIT IT. Luka, who made some mistakes too, was patient, loving and forgiving. Almost too forgiving, not many people would deal with all that Nick put him through.

Because when two people found each other, two people who were meant to be, words didn’t even matter anymore. They just knew. And that was the luckiest thing of all.