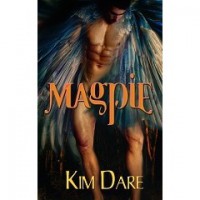 Kane has been living with humans and without a nest for years. Whoring himself for his next hit or new shiny object, assuming he pays for his shiny object. Finally, the humans are sick of him and call the local nest to come get their magpie. Everet, one of the security officers from the nest, was called to get Kane. Now, some background on Magpies. Magpies are known for their promiscuousness and thieving. Magpie sees new toy, magpie wants new toy, magpie plots how to get the new toy. So, naturally, the nest doesn’t want a magpie hanging around. But, Everet wants to give him a chance and decided to act as Kane's Master. Anything Kane does will be Everet’s responsibility.

Everet. He was a perfect master for Kane. He broke Everet’s horrible habit of using sex to manipulate. He didn’t let anything that happened in the bedroom effect anything that happened outside of it. Kane couldn’t use sex to make up. He couldn’t de denied sex as a punishment. Sex has nothing to do with anything but the two men and their enjoyment of each other. Everet believed in Kane to a fault. He never wavered in his faith that his Magpie could be a productive part of the nest. Everet, in all his uber-alpha sexiness, proved Kane’s worth.

Kane has spent his whole life being used by others. How can this man want anything from him for free? He had a hard time getting used to this and used every trick in the book to prove that sex can be used to get what he wants. Kane was a great character. Despite all his flaws he was so likeable and you can’t help but love him and want him to straighten up. He was arrogant, snarky, and relentless in trying (and failing) to manipulate Kane. Through Everet’s unfailing belief in Kane, he was able to accept that he could be loved and wanted for simply himself. By the end, he was still a brat, but he was Everet’s brat.