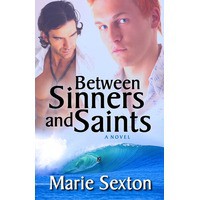 Levi meets Jamie, his massage therapist, at a time in his life when all he cares about is his next conquest. So what does he do? Hit on Jamie, naturally. We learn pretty early on that Jamie has a deeply troubled past and still has emotional scars that causes him to have fear of being touched. When Levi comes on too strong Jamie is completely put off and wants nothing to do with the other man. Levi is able to finagle his way back into Jamie’s life but with a very strict ‘no touchy, no feely’ rule set in place.

As their relationship and friendship grows Levi begins to realize how much he loves his best friend Jamie. This is when I realized how much I love Levi. He proves just how much he loves Jamie with his patience. He keeps his desires hidden so he won’t frighten Jamie. Levi changes his selfish lifestyle choices for him and keeps Jamie safe, all without Jamie fully understanding why. Levi doesn’t ask for anything in return, this wasn’t a ploy to prove his love. He just does these simple, thoughtful gestures for Jamie simply because he loves him. It was beautiful, touching, and perfect for a sappy heart like mine.

Levi also deals with his Mormon family who loves him but highly disapproves of his homosexuality and lifestyle choices. This is a constant battle between him and his family. I thought this was very well done. Levi being gay and the drama it causes with the family, effects everyone involved. He’s not the only one who’s tired of the “talk” but his brothers and sisters are as well, and I was glad to see them start to stand up for Levi. Having experienced this in my own life, and being the sister in this situation, I thought Ms. Sexton portrayed parents who love their son but at the same time don’t condone his lifestyle very realistically.

This was such a wonderful, touching, loving story of two men battling demons from their past and then looking forward together. I need a sequel!