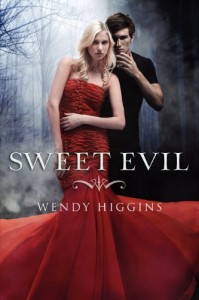 Anna is a sixteen year old good girl. She genuinely wants to be the best person she can. So much that she freaked out when she deliberately told a lie, really freaked out. I liked that she was such a good girl and wasn’t prudish. She never judged others. She was so kind and genuine.

Throughout Anna’s life she has been gaining new “abilities”. She has gained heightened senses and can see and sense people’s emotions. She has had to keep these abilities to herself throughout her life until she meets someone else who is like her, Kaidan. He tells her about who her family is and what she is. She finds out that she is the daughter of an angel and demon. Which makes her a nephilim.

I loved the author’s take on angels, demons and the nephilim. The demons that are able to use a human as a host are called Dukes. These Dukes focus on a specific sin and have legionnaires who are demons that whisper temptation into human’s ears. I could totally picture evil demons floating around and whispering to humans trying to convince them to indulge in their sin of choice. The sons and daughters of the Dukes are the nephilim and are expected to help their fathers in this. Anna finds that as a nephilim she is the Duke of Substance Abuse’s daughter. The Dukes take their jobs and the jobs of their children very seriously. If it’s discovered that Anna has no interest in tempting others she will be severely punished. Because of this she has to feign interest in wanting to help humans give in to substance abuse. She really had an internal struggle with staying true to herself while appearing to be the temptress of drugs and alcohol.

Then there was Kaidan. Who (of course) is the Duke of Lust’s son. This makes him hard to resist for Anna. She is immediately drawn to him and there was a little bit of instalove going on. But I did like their relationship, even if he continues to decide what is best for her and just go with that. He spouted the usual “I want to protect you and we must be apart to be safe” BS.

I love how the book ended. Anna is on her way to becoming one kickass heroine. She is doing what she needs to survive but doesn’t lose that goodness that she has. She remembers that she is also the daughter of an Angel and is ready and willing to be used for that side.