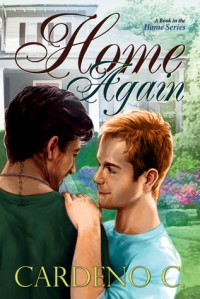 This story is told from the perspective from both Noah and Clark. The scenes alternate between what is happening in the present and in the past. In the present, Home Again begins with Noah waking up in the hospital after an accident. When we awakes he sees his estranged brother there and immediately asks to see his partner, Clark. After Clark arrives and the doctor discusses Noah’s prognosis we find out that Noah has lost his memory for the past three years of his life. He has blocked out this time because he and Clark had broken up and were not together for the past three years.

The past is narrated by Clark and begins when he first meets Noah when Noah was thirteen and Clark was seventeen. I especially loved the scenes from the past. They showed how much the boys meant to each other and how much they loved each other before they even knew what it meant. Well, Noah knew exactly what it meant, but it took Clark a while to realize it.

As the story progresses we see how the two men fall in love in the beginning of their relationship and how they come back together in the end. It was a very sweet romance. I really enjoyed the past/present perspectives and they were very well done. I did have a WTF moment when we found out why they broke up. If not for that I would have rated this 4 stars.